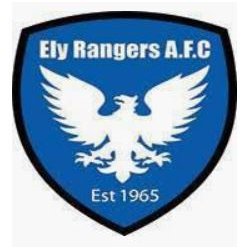 (A) Green Shirts Shorts and Socks

Ely Rangers Association Football Club are a Welsh association football team founded in 1965. They are based in Ely, Cardiff, and they play at Station Road Wenvoe.

Ely Rangers' origins date back to 1963-64 when current chairman Graham Clarke was playing for Ely YMCA. At the time the club did not have enough players to put out a full side, so they joined with Heath Park Rangers. After just one season, a chance meeting with other boys from Ely whilst on holidays at Butlins resulted in the formation of Ely Rangers AFC in 1965. The club joined the Cardiff Combination League and quickly established themselves as a major playing force. In season 1967-68 they were crowned champions of the First Division and with two seasons in the Senior Division they won the first of five championships. Their further triumphs cam in 1970-71, 1975-75, 1977-78 and 1978-79.

The club's success was not limited to the league as they won the Combination Cup on five occasions, the City Supporters Cup four times and the Senior Cup twice. Following this successful period, the club were on the look-out for a ground of their own, so they could further their ambition of South Wales Amateur League status. In 1983 Ely Rangers moved into Station Road Wenvoe and were accepted into the Amateur League. Success followed, winning the Corinthian Cup and the SWFA Amateur Cup twice.

In the Amateur League the best finish was runners-up, until the 1996-97 season where Ely Rangers won the First Division Championship under manager John Boulton. Rangers then had to contest a play-off with old rivals Caerau Ely, at Ninian Park, and won the game quite convincingly 3-0 in front of 1,300 to claim their place in the Welsh League for season 1997-98.

In the Welsh League Rangers spent their first three seasons in Division III finishing 5th, 5th and then runners-up (drawing only three games and winning the rest) and in turn promotion. Division II was a short stay of only one season finishing third and again winning promotion. In season 2001-02 Ely entered into the First Division and finished the season in 8th position.